Mowing and Other Summer Activities

At the old house, I would need to mow the yard quite often: at times every five days was not too frequent. The grass was thick, the yard held a lot of moisture, and the yard was big—two hours was about normal to get the whole thing done.

At the new house, things are a little different. The yard is much smaller, taking a little less than half the time to mow. The grass is much thinner, and sitting up on a knoll, the yard holds relatively little water—I can actually mow in the mornings. But the best part about the new yard is with more shade and thinner grass, I don’t have to mow as often. In fact, I mowed two days before we went to Texas. I mowed again a month and two days later. Granted, a small part of the yard was could have used a good trimming long before that. But the every five day thing is thankfully in the rearview mirror.

Another benefit of not mowing for a month is seeing what grows. When the french drain was put in a rose bush was in the way of progress. But surprise, it has come back and bloomed. I have no idea how to care for rose bushes, but I suppose it is now time to figure that out.

We enjoyed our annual two-week trek to Texas. It was good to see family and friends. Some kids from our youth group and all our kids and some of their cousins spent the week in Mississippi at their mission camp. 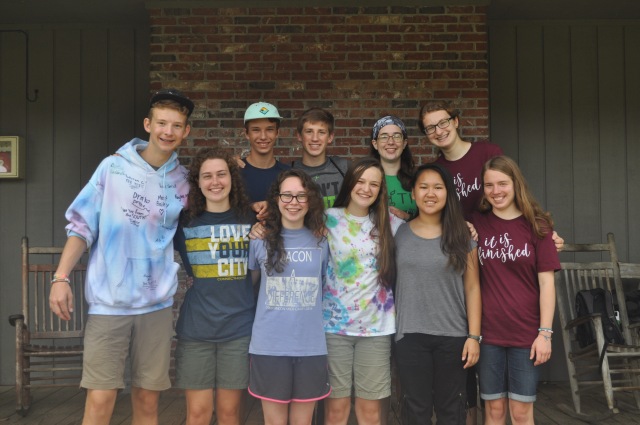 A week from today we get Lauren back from camp where she has been working all summer. And then the following week we help Jenna move to Texas to start her new job at Regents Academy in Nacogdoches.

The week after that is orientation for the new school year, and then Rebekah and I start Classical Conversations the week after that. This will be the first year I’ve done CC without one of my own kids in the class. I will have six students this year as opposed to 11 last year.

After throwing away tomato after tomato that had been eaten by worms, we’re finally starting to harvest quite a few, as well as peppers and okra. Our garden probably gets a little too much shade, but it’s doing well nonetheless. It’s about time to can some jalapeños.